The intensity of NMR signals is directly proportional to the population differences between Zeeman energy levels, i.e. to the nuclear spin polarization. In thermal equilibrium the populations obey the Boltzmann distribution. At room temperature and at typically available magnetic fields of NMR spectrometers (usually B0 = 2-18 T), the nuclear spin polarization is on the order of 10 ppm (~10-5). Such an extremely low polarization significantly limits the sensitivity of NMR based methods.

We develop and apply several nuclear spin hyperpolarization methods to increase significantly the population differences and overcome the sensitivity issue in our studies. 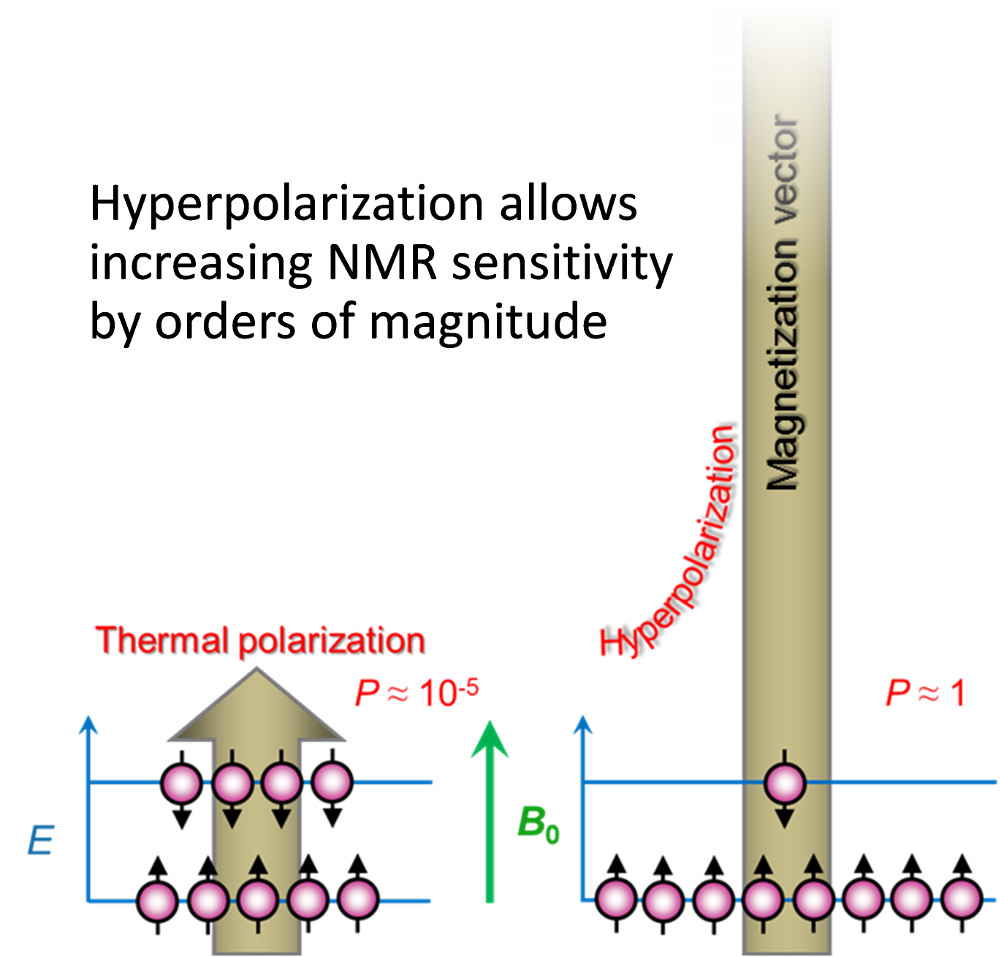 Molecular hydrogen, H2, exists in the form of a mixture of two isomers differing in the total nuclear spin: ortho- isomer of spin 1 and para- isomer of spin 0. Under the thermal equilibrium at ambient temperature, the mixture contains practically statistical concentrations of para-H2 (25 %) and ortho-H2 (75 %). At lower temperatures, however, para-H2 is much more preferred with virtually 100 % content of this isomer at temperatures close to 20 K. The interconversion between the isomers is a slow process, which allows storing the para-H2 enriched H2 for long time without back conversion. When the enriched para-H2 is used in a chemical reaction like catalytic hydrogenation, the resulting products can have substantially enhanced NMR signals due to the formed non-equilibrium nuclear spin state inherited from para-H2. This phenomenon initially was referred to as PASADENA or ALTADENA, which are differing in experimental conditions. Parahydrogen-induced polarization (PHIP) is used as a sort of general name of this phenomenon. We have a home-build PHIP polarizer which is used in several projects to produce hyperpolarized substances. For example, in investigations of reactions in microfluidic devices (microreactors) and in ultrafast Laplace NMR experiments (UF-LNMR). 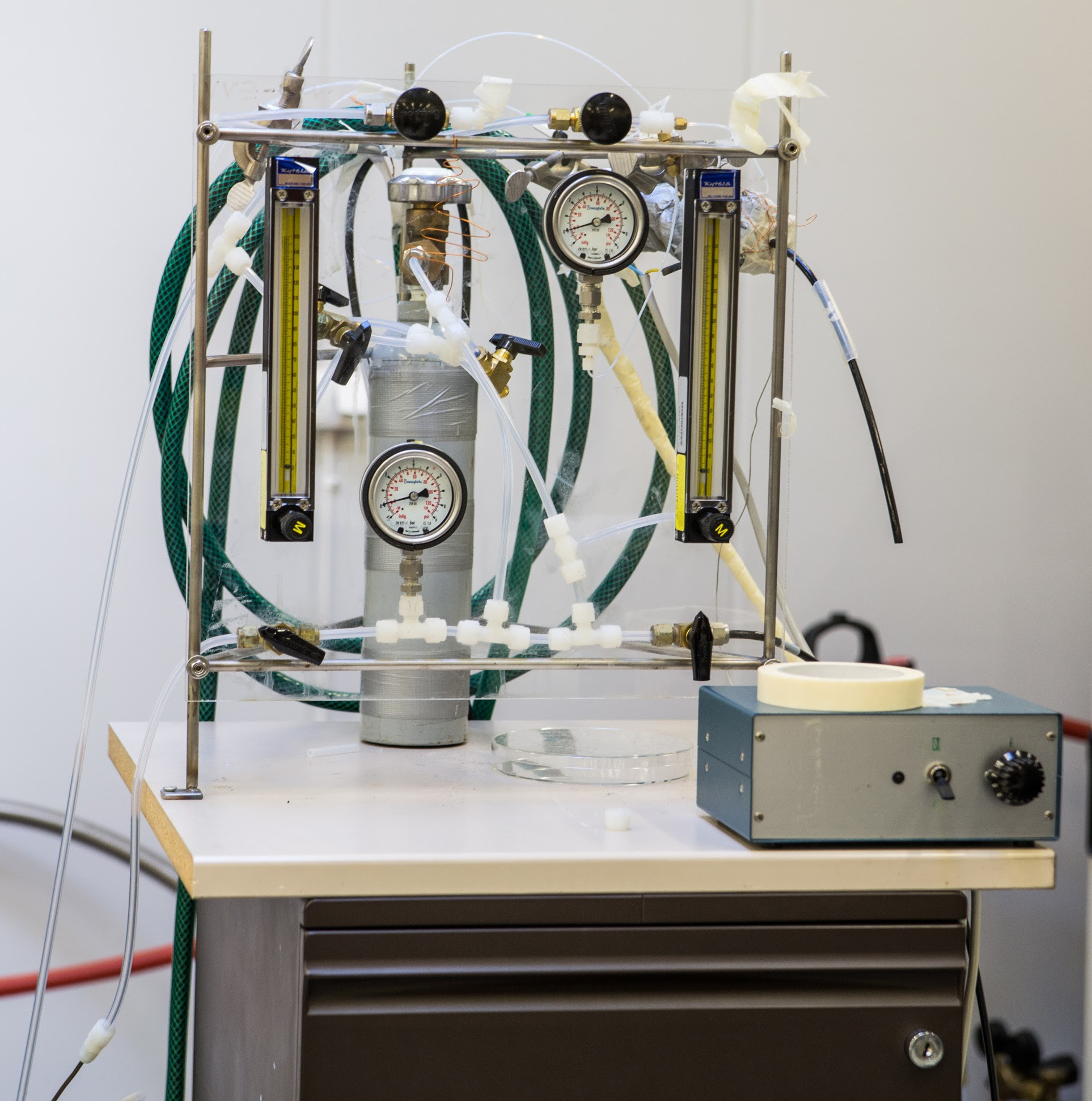 Parahydrogen can be utilized to polarize molecules without its actual chemical incorporation to a substrate via reversible chemical interaction mediated by certain metal complexes. This method named SABRE (Signal Amplification By Reversible Exchange) is available in our laboratory as well. During the reversible interaction, a target molecule and parahydrogen associate in a metal complex and non-equilibrium spin order transfer to the target molecule occurs via spin-spin coupling network. This approach allows to polarize molecules without a chemical modification of the target molecule. 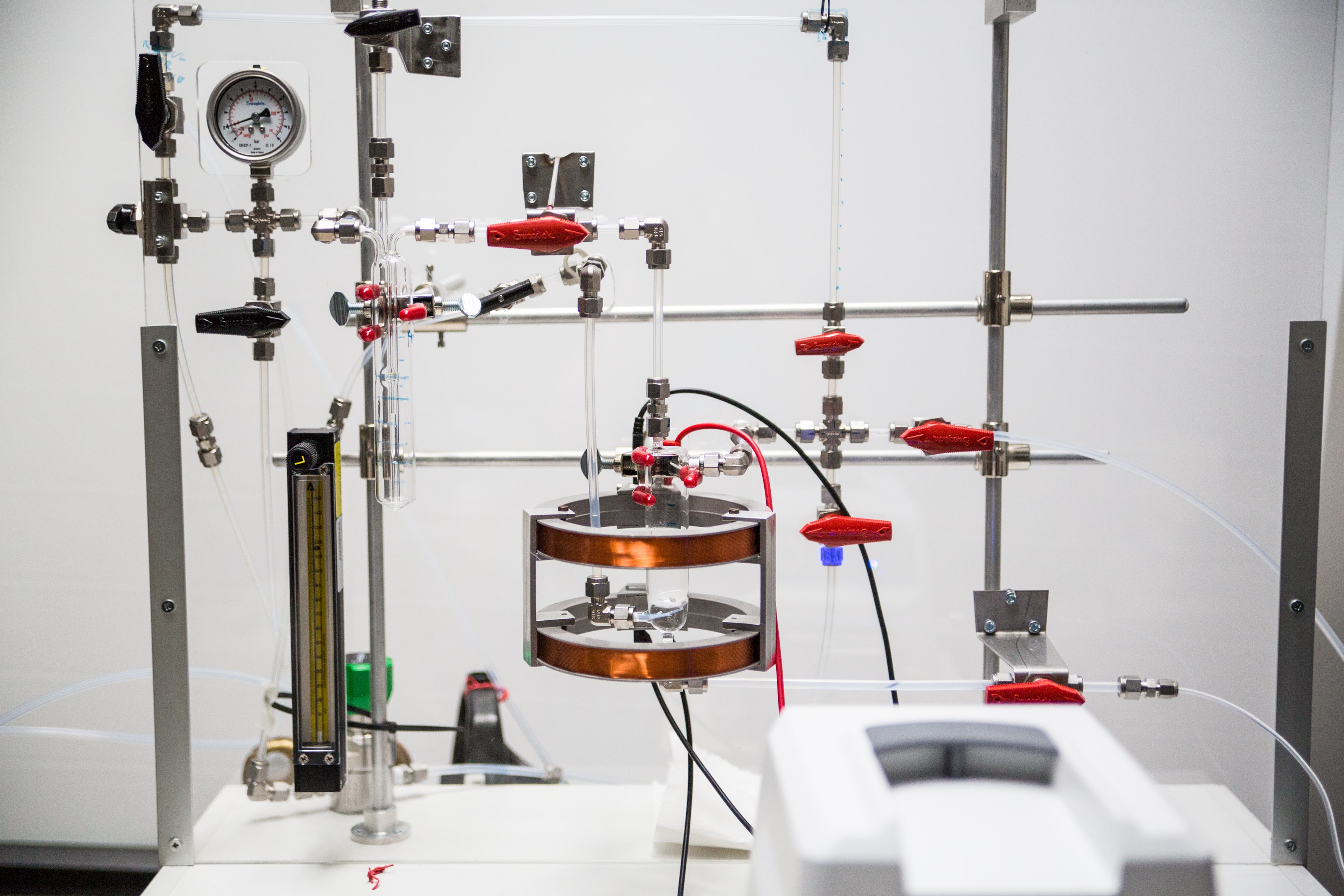 129Xe has a range of useful properties but suffers from the very low sensitivity. The intensity of the NMR signal depends on the occupation difference between the Zeeman energy levels, i.e. the nuclear spin polarization. In thermal equilibrium the occupation numbers obey the Boltzmann distribution; near the room temperature and magnetic field of the NMR spectrometer (usually B = 2-18 T) the nuclear spin polarization is on the order of 10 ppm (~10-5). At thermal equilibrium, the detection limit for 129Xe NMR signal is about ~1018 nuclei which is much lower than for 1H. This significantly restricts the use of the 129Xe NMR spectroscopy in materials research in which the quantity of the 129Xe nuclei may be very small. Our group has facilities to produce hyperpolarized 129Xe gas. The attained 129Xe spin polarization through hyperpolarizing is 1-70%, which means that at its best the 129Xe signal enhancement is over 50000 comparing to signal in thermal equilibrium.

The polarization cell is placed inside an aluminum oven which is heated to 120-150°C to get Rb vapor inside the cell. High pressure (9 atm) inside the cell is used, because the broadening of Rb absorption linewidth, induced by the pressure, leads to a more efficient optical pumping. It is not possible to gain high polarization of 129Xe in a system where the pressure of Xe gas is high, therefore helium is added as a buffer gas. Circularly polarized light is directed through the cell in order to polarize electrons of Rb, which in turn polarize 129Xe nuclei. Small amount of nitrogen (1 %) in the gas mixture is needed to suppress the reradiation of light by quenching excited rubidium atoms. Polarized xenon gas flows then into the sample tube through PTFE tubing.