We demonstrated several efficient systems based on ansa-aminoborane (ABB) moiety to provide PHIP. The chelating arrangement of the N and B reactive centers in AABs favors rapid H2 addition dynamics. Importantly, the intrinsic feature of AABs is the presence of a dihydrogen NH..HB bond in the AAB-H2 adducts. Thus, AABs are referred to in the literature as “molecular tweezers” that stretch, but do not completely split, H2 molecules. We consider these interesting objects as promising “molecular sensors” sensitive to para-H2, which become hyperpolarized whenever surrounding para-H2 is captured. We look into catalytic, mechanistic and structural aspects of para-H2 activation by the tweezers to find efficient species tolerable to water and providing high degrees of hyperpolarization of various nuclei. 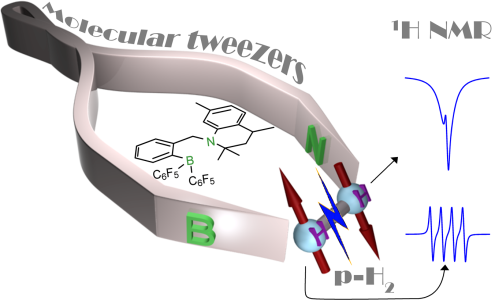